For Calendar year 2019, we continue to seek funding for 16 new printer/ink/media systems that were actually started in test in late November, 2016. Because the tests will run continuously for several years, it was important to get them going even if only partial funding is currently available. As always, we will perform all Aardenburg Media Testing using the i* Metric, but new for 2019, we have begun publishing the results with an expanded report format. The updated report format will not only show light fading properties but also tracks additional long term Dark Storage Stability factors relating to additional yellowing/discoloration which can occur in some media when the print is stored in the dark or at low light levels after an initial display period where exposure to higher doses of light has occurred.

New and now in test are the following 16 systems. These studies involve tracking 80 samples in total, because individual samples of each printer/ink/media combination will be removed permanently from light fade test units at the 20, 50, and 100 megalux hour exposure intervals, thereby retired to dark storage at known light exposure doses. Their ongoing dark storage color and tonal accuracy will be measured at 6 month intervals and compared to corresponding dark storage control samples which were all printed at the same time. 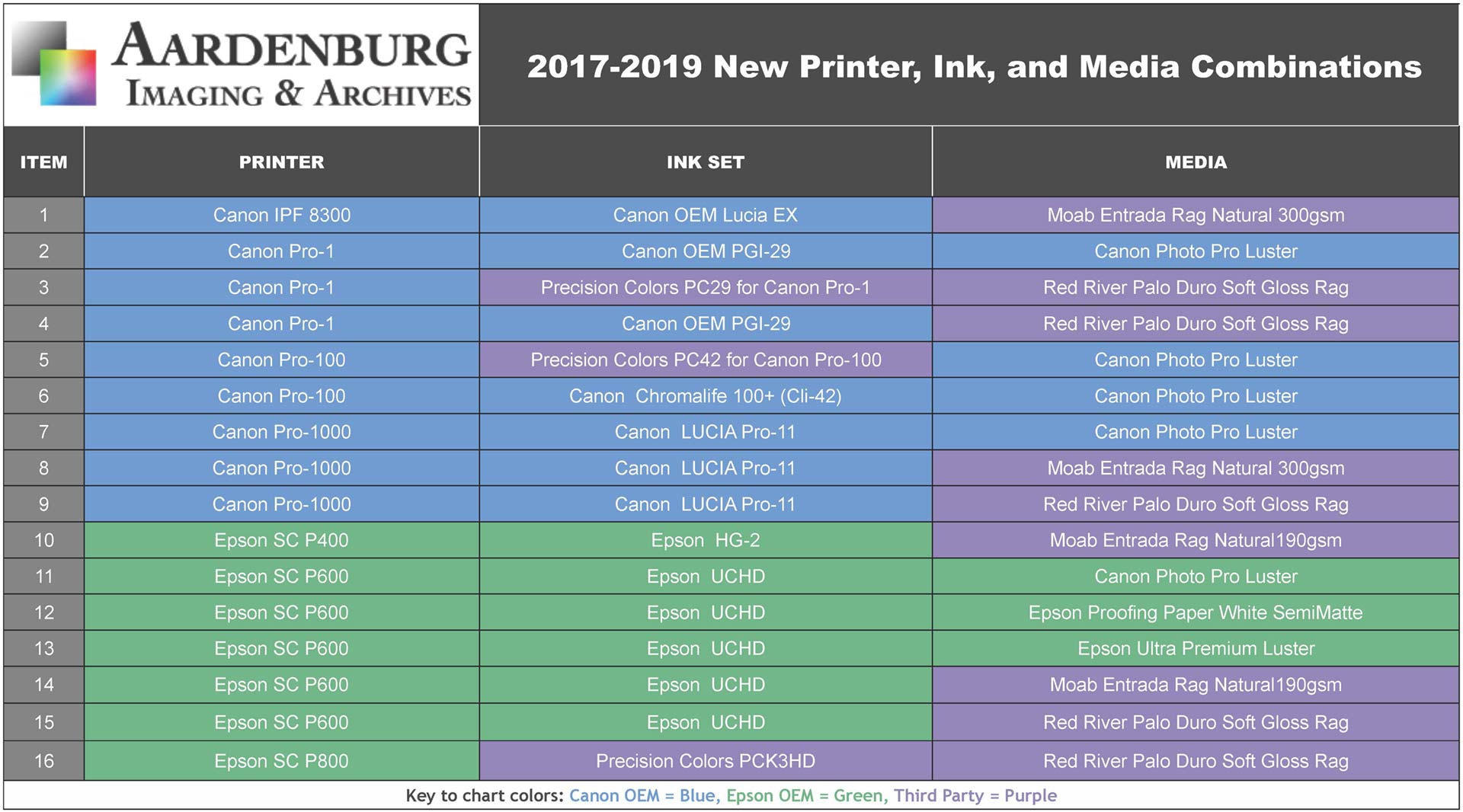 Underlying the choice of these 16 samples are some deliberate experimental design objectives. First, there are specific comparative tests of three different Canon pigmented ink formulations (including the latest Canon LUCIA Pro-11 set made on or new Canon Pro-1000 printer purchased in 2016) to Epson’s newest UltraChrome HD ink set with its significantly improved yellow pigment ink.  Some of the choices represent a direct paired ink set comparison on specific media, notably Moab Entrada Rag Natural and Red River Palo Duro Soft Gloss Rag which are both OBA-free and expected to have stable media white point properties. Thus, these media should better reveal fundamental light fade properties of the inks themselves with less confounding of the results due to poor media stability.  Second, some ink sets are paired with resin coated (RC) media where the media whitepoint properties are expected to shift during light exposure due to more rapid fading of the optical brighteners (OBAs) in the media, but also further change is expected to occur in dark storage due to their RC-layer polyethylene (PE) with incorporated titanium dioxide(TiO2), and optical brighteners (OBAs).  Here, Canon Photo Pro Luster and Epson Ultra Premium luster will be evaluated for media stability against a third RC paper, Epson Proofing Paper White SemiMatte. Epson’s proofing paper differs from the Canon and Epson photo luster media because it contains no OBAs in the PE layers, only OBAs in the paper core where they are more isolated from direct light exposure and also certain light- reactive aspects of the PE/TiO2 chemistry.  Lastly, we will be evaluating some third party inks made by Precision Colors and comparing to their respective Canon and Epson OEM counterparts. A Precisioncolors pigmented ink set for the Canon Pro-1 printer and another for one made as a replacement for K3 or HD inks in various Epson Printer models are being evaluated.  Also, a Precisioncolors dye-based ink set for the Canon Pro-100 printer will be compared directly to Canon’s own OEM set for the Pro-100 on a popular RC photo paper, Canon’s Photo Paper Pro Luster.  Precisioncolors.com has gained popularity and respect among amateur printmaking enthusiasts because it offers reliable and affordable third party inks for both Epson and Canon photo printer models. Aardenburg Imaging and Archives has received more than one request to test Precisioncolors inks for light fade resistance compared to the respective OEM ink sets, and with help from the printmaking community, we have been able to obtain these PrecisionColors samples printed accurately to our test target image specifications.

Epson currently has four variants of its UltraChrome branded aqueous ink sets, each with its own print permanence properties: The 8-color UltraChrome HD ink set used in the new SC-600, SC800, and SC 6000 and 8000 printers, the 10-color HDX ink set (standard edition) used in the new SC 7000 and 9000 wide format printers, the 10-color HDX commercial edition (where a light grey ink is permanently swapped with a violet ink cartridge in the SC 7000 and 9000 wide format printers) and lastly, a novel HG-2 ink set that has seven colors plus a gloss optimizer. What’s novel about the HG-2 ink set is that it has no photo gray inks but adds a gloss optimizer and doubles down in the red-orange (e.g., skin tones) part of the color gamut with the inclusion of both an orange ink cartridge and a red ink cartridge. The HG-2 ink set’s lack of photo grays to replace cyan, magenta, yellow (and perhaps some orange and red inks) when printing low chroma and neutral gray scales make it inevitable that some light fastness differences are going to exist when comparing prints made on the SC-400 to other Epson photo printers like the SC-600 and SC 800 desktop models. The following table illustrates these variations in Epson’s UltraChrome branded ink technology. 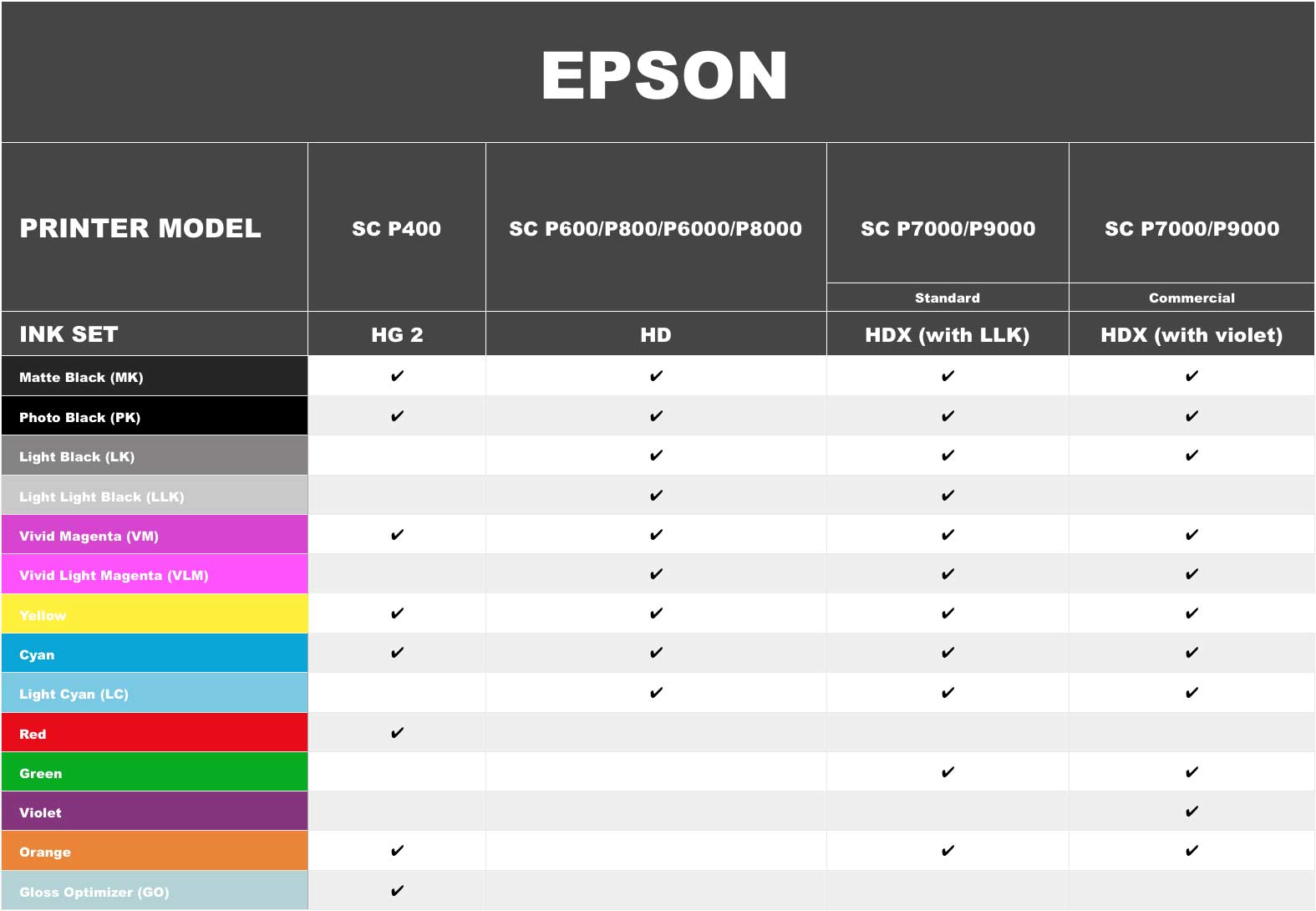 Canon introduced a new 17 inch printer called the imagePROGRAF PRO-1000 in October, 2015 which utilizes a new LUCIA PRO 11-color plus Chroma Optimizer ink system. Canon followed in May, 2016 with new wide format Pro-2000 and Pro-4000 models.  The Pro-1000, 2000, and 4000 family of imagePROGRAF printers all utilize the same print head design and the new LUCIA PRO-11 ink plus Chroma Optimizer ink chemistry. Canon claims improvements to color gamut, better Dmax, and enhanced detail in darker areas of the prints with it’s Pro-1000, 2000, and 4000 printers and LUCIA PRO-11 ink set. In terms of colorant choices, the Pro-11 ink set appears to meld together various choices of color channels found in the Canon Pixma Pro-1 printer and those found in the older LUCIA EX ink set which was used in Canon’s previous imagePROGRAF line of x300 and x400 series wide format printers. The color cartridge options are as folllows: 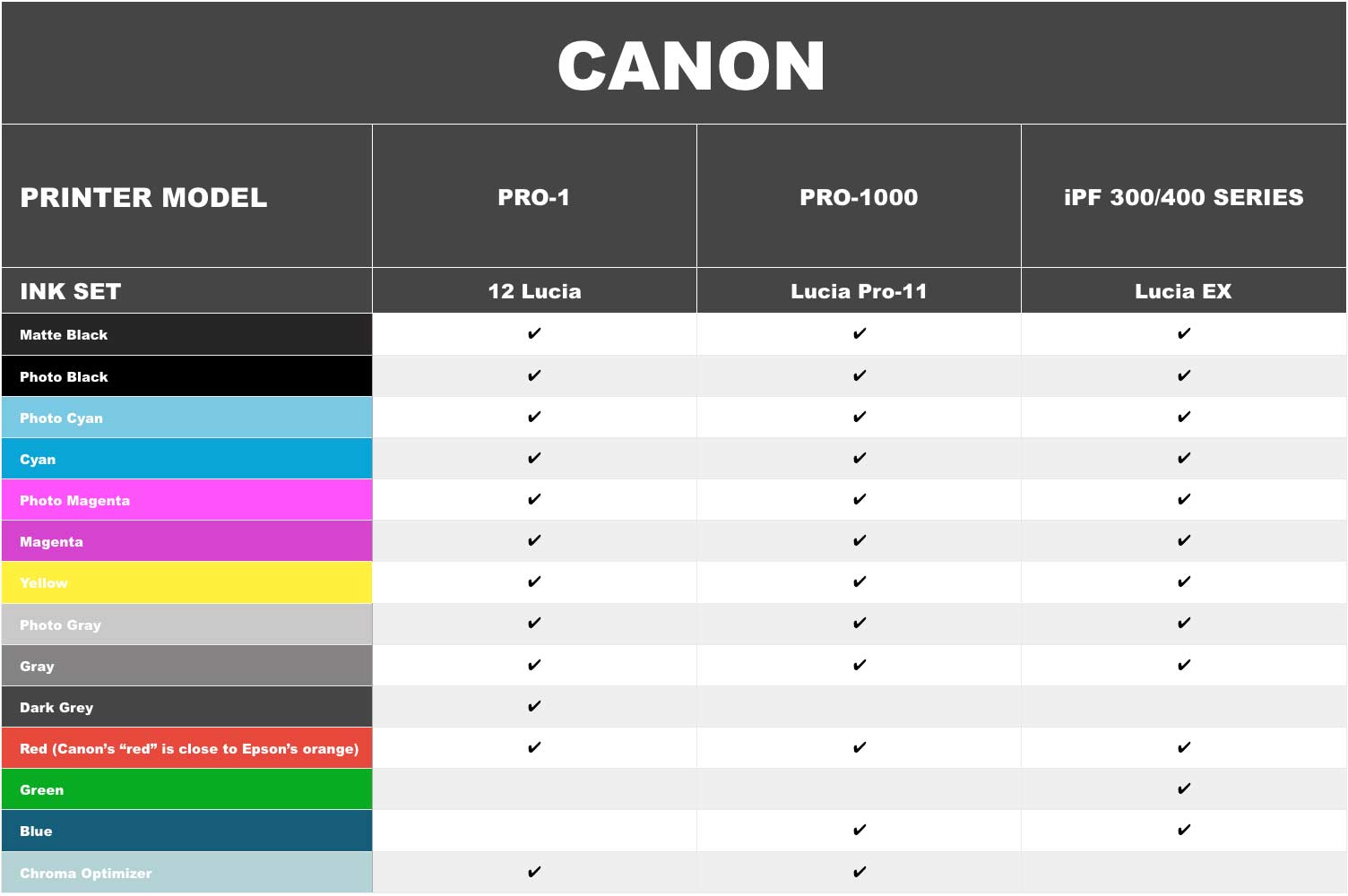 Aardenburg Imaging has begun some closely paired 200 megalux hour comparative light fade tests using both the latest Epson and Canon ink sets on various media as can be seen in our experimental design for the 16 new printer/ink/media combinations now in test. Epson has claimed an overall 2x improvement in light fade resistance for its newly reformulated Ultrachrome HD ink set and a further claim of 200+ years print longevity on select Epson media (assuming certain environmental conditions). Aardenburg tests of Epson’s new HD inkset that began in 2015 on two different media have now verified Epson’s 2x claim on one Epson paper and another third party paper. Our tests also clearly demonstrate how the fade resistance of important skin tone colors is even more than 2x improved when compared to the older K3 ink formulation, notably due to a much improved yellow pigment light fade resistance. However, Epson’s 200+ year claim is further dependent on the print owners’ tolerance for “how much fade is too much fade”. According to our projections, image fading will indeed be easily noticeable well before 200 years pass when applying Epson’s assumption about the average light intensity conditions for the prints on display.

Canon has made far more modest claims for print longevity, citing only internal studies using Canon Platinum Pro paper (PT-201) and Canon Photo Paper Pro luster paper (LU-101) with the new Pro-1000 printer and the new LUCIA PRO-11 ink set (Note: these claims were originally listed in the Canon Pro-1000 printer specifications, but now appear to have been removed from this documentation). The Platinum Pro paper was rated at 60 years light fastness while the Luster was rated at 45 years light fade resistance. Canon did not disclose its test methodology or failure criteria, but taken at face value Canon’s claim is surprisingly more conservative than Epson’s 200+ year claim. The new Lucia Pro-11 inks are now in test using Canon’s Pro luster and also a third party non RC fine art luster paper (Red River Palo Duro Soft Gloss Rag). As the new tests unfold we will have some independent answers for you to help you make more informed choices regarding the inks and media you choose in your own printmaking efforts.